Four panels and four large prints of the work “I.d” by “George Alamidis” have been included in “WORK IN MOTION” An exhibition Curated by Per Pegelow and Etta Gerdes.

The I.d cards and works on paper were delayed by Bulgarian customs, and were not on the gallery walls for the opening of the show.

The work arrived at “The Red House” three days late and is now part of the exhibition.
Work In Motion: on Migration, Mobility and Labour. 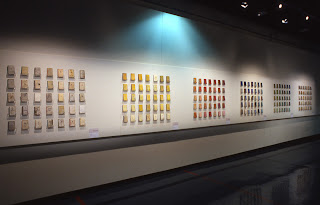 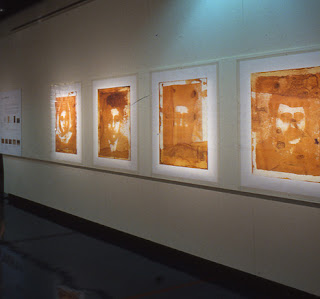 Work In Motion: on Migration, Mobility and Labour
“From The Red house program information”
Media art exhibition curated by Per Pegelow, following a concept of Etta Gerdes and Per Pegelow; curator of the commissions to the show – Yovo Panchev

The current change in global living conditions by new ways of communication and transport – often called globalization – is enabled by certain developments within the media. The view of this development with all its social and economic issues is represented by mass media in a way that leads to a phenomenon Jean Baudrillard calls “hyperreality”, where the perception of mass media products starts to replace the independent view on the common reality. Baudrillard suggests that the “production of alternative media” is a way back to a clear and more independent perception of reality.
The media works of this exhibition do exactly this – (re-)producing a clear view on social lives within the European and North American nations in times of rapid “globalisation”. The media art exhibition pools various artistic approaches in a pulsating art show.